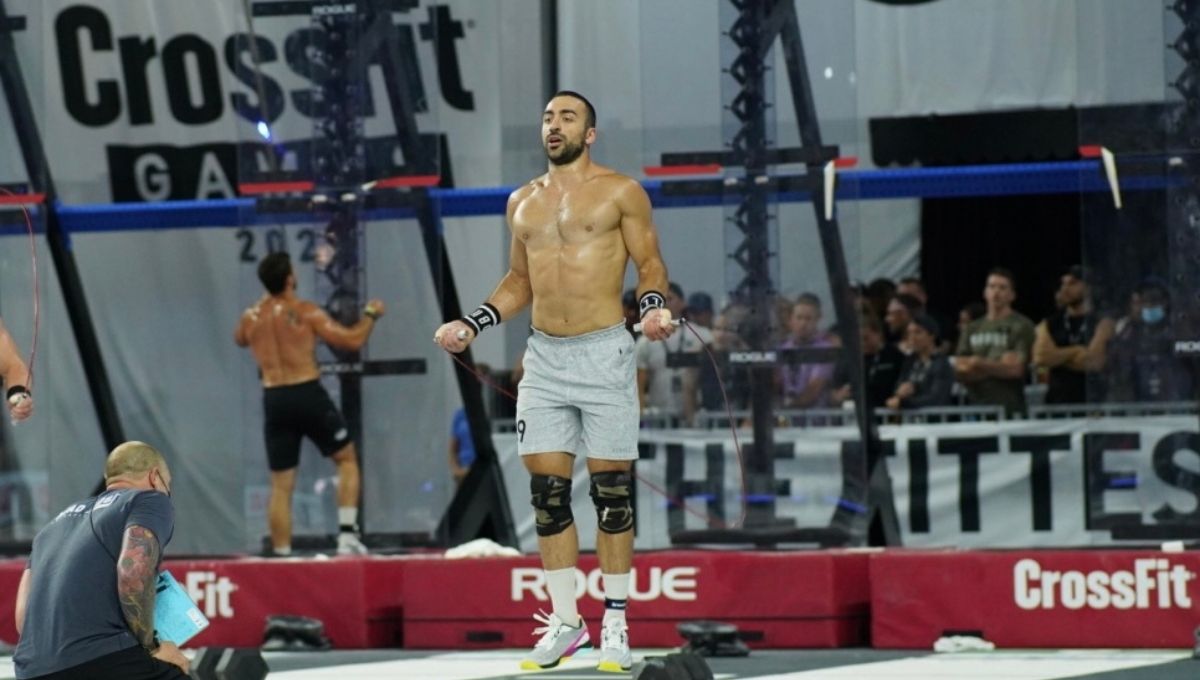 Lazar Đukić was relatively unknown globally when he first stepped into Lake Monona on Wednesday 28th of July 2021 to participate in the 1st CrossFit Games event of his career. He came out of the water in 2nd, and still, not much coverage was given to the Serbian athlete. After 15 events, he was named 9th Fittest Man on Earth and the world applauded his feat.

“It could have been better,” Lazar explains. “But we need to save something for next year.”

How did he get there? Was it really lucky that someone in his rookie year finished in the top 10?

BOXROX interviewed Lazar Đukić a couple of weeks after the end of the CrossFit Games while he was in Strasbourg, France, resting mind, muscle and bones.

Find out how the Waterpolo athlete became the most known Serbian household name in the CrossFit community in less than a week.

Note: This is the 1st part of the interview with Lazar Đukić. The 2nd is available by clicking here.

Lazar Đukić Was a Waterpolo Athlete

In Serbia, there are two sports that get the crowd going: basketball and Waterpolo. Interestingly enough, Lazar took the water sport, while his younger brother Luka Đukić diverted to the team sport – Luka also participated at the CrossFit Games this year for the first time and came in 29th overall.

Lazar however had given up Waterpolo when he travelled to the United States to study and work for a short period of time as a lifeguard. “There I got familiar with CrossFit through a friend who was doing it already.”

Lazar thought he was athletic until his friend challenged him to his first CrossFit WOD: the Murph. Lazar did not do Murph with the weighted vest, and still, he lost to his friend and could not finish the workout. “He beat me bad and I wanted to win, so I started practising, learning new skills, and that is how it went,” Đukić tells us.

Lazar was just interested in CrossFit at the beginning and then he saw some competitions happening in Serbia. He trained for a few months and he came in 2nd a few points behind the Serbian Fittest on Earth on Lazar’s first competition.

”So I was like, maybe I can be good in this if I try. And I kind of started training for real and started lifting.”

Rookie Only If You Don’t Know Where to Look

Malory O’Brien won the 2021 Rookie of the Year, but we are pretty sure that Lazar Đukić was a big contender for the honour. However, you are mistaken if you think he is a total rookie.

I had the mistake to ask Lazar which competitions he participated in before and which ones did he get on the podium. What followed next was a 2-minute list of competitions around the Middle East and Europe.

Lazar Choose Not to Participate at the Games in 2019

In 2019 CrossFit Inc. had changed its approach to how athletes would get invited to the Games. And that is one of the reasons Lazar Đukić was eligible to compete in Madison, but chose not to.

National Champions would get a straight invitation to the Games and the Open would dictate who was the fittest in each country around the world. Lazar was named the Fittest in Serbia for the 3rd time in a row in 2019 and could have travelled to the United States to try his luck against Mat Fraser, BK Gudmundson and Noah Ohlsen, but he chose not to.

“There were hundreds of athletes,” Lazar recalls. “I knew most of them would be cut off their first, seconds, or third event, and for Serbia, that trip is pretty expensive. It was a really easy decision for me.”

Lazar says he decided to focus his energy on improving as an overall CrossFit Games athlete. In 2021 CrossFit changed again how athletes would be invited to the Games, with Quarterfinals and Semifinals around the world, which gave Lazar a better understanding of his athleticism and gave him the assurance that he was ready to take on the big names of CrossFit.

“It was a great confirmation for me that I did all of those stages [Quarterfinals and Semifinals] pretty good,” he says. “It gives you some kind of motivation. That you are ready and it’s time now.”

And so, after a week in Madison on his first attempt at the CrossFit Games, he is now the 9th Fittest Man on Earth.

Not only it was Lazar’s first time at the CrossFit Game, but his brother, Luka Đukić, finished 3rd at the CrossFit German Throwdown and was also eligible to go to Madison. The brothers shared the same bedroom and hyped each other up before the events.

“It was really, really special for both of us,” Lazar remembers. The fittest brothers in Serbia usually compete with each other to know who is better at a particular WOD than the other. But during the Games, the atmosphere was different.

“We didn’t even consider each other as competition. We considered ourselves as a team. Even though you have your coach, they are not going to know what you are going through,” Lazar Đukić explained.

This is part 1 of the interview with Lazar Đukić. Part 2 focuses on Lazar’s future and his plans for 2021 and life after retirement. Click here to read part 2 of the interview.

Asking Girls in the Gym – What is the Most Important Muscle for Men? (Probably not What you Expect)